This is a multicultural world with multiple languages--six to seven thousand.  The United States is a multicultural country where the U.S. Census tracks 380 of the languages used here.  Within these languages there are dialects with local and regional differences.  Language is also often ladden with social norms, customs, inflection, and even body language.  Understanding these differences and helping you communicate competently with your non-English speaking clients becomes the responsibility of the interpreter and translator.

I've included this information to help make you aware of the complex nature of communication. 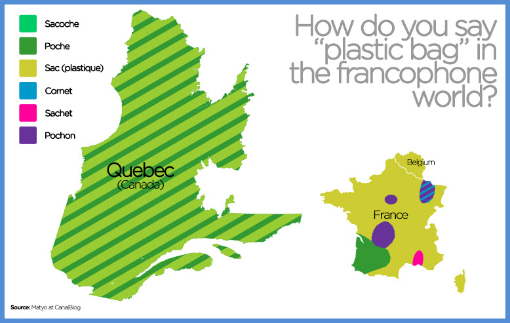 "...what about the integrated dialect words in official languages? Take for example...“plastic bag” in the French language; we can see above how, within the same language, [it]...varies between two French speaking geographies and within individual countries/states." -- excert from an article by Damien Robert

Language and culture are interwoven.  This short video gives the viewer a taste of how a language (in this case, Spanish) can differ among countries and cultures.  Language interpreters and translators must be aware of these differences when doing their work.  In the case of federally-funded programs and services, the expectation of Title VI of the Civil Rights Act is that all interpretation and translation will be 'competent'.  This means that the interpreter and/or translator must consider dialect and localization when performing work.

For answers to your questions, please call:

Or send us an email.